You are here: Home / Archives for economy

In the normal course of things, it is expected that each generation of Americans will be better off financially than the one before it. That is not holding true for the Millennials. They are lagging behind their Boomer forebears by an average 20 percent in earnings.

The Federal Reserve’s latest figures, as interpreted by the advocacy group Young Invincibles, show that, with median household income at $40,581, the Millennials are 20 percent behind what their parents were doing at the same age in life.

The facts run counter to the wisdom that education is the answer, since the Millennials outstrip their elders in that category.

The M generation boasts less home ownership and has half the net worth of the Boomers. Their education debt is significantly higher, the data show.

The scenario is not good for the new administration, which has pledged a return to post-World War II economics. Culture and identity issues that split the country are factors. White Americans still earn much more than Latino or Black peers, but they have also seen their incomes drop the most, relative to the Boomers.

Many of the Millennials bemoan the fact that at their ages, their parents had homes and were rearing families. Too many of today’s college graduates are working at low wages in jobs that have nothing to do with the courses they took.

Education does have an effect in boosting incomes, but the median college-educated Millennial who has student debt is earning only slightly more than a Boomer without a degree did in 1989, the figures say. More young Americans have a college education, with some 35.6 percent of those 25- to 29-year olds boasting a degree, compared with 23.2 percent in 1990.

In1989, home ownership for the earlier age group was 46 percent. It has dipped now to 43 percent, and the median net worth of the average Millennial is $10,090, 56 percent less than that enjoyed by the Boomers at the same age.

Despite being born at a time when opportunities seemed at a crest, downward mobility is the trend for white Millennials if the current numbers tell it like it is.

The rancorous 2016 election campaigns are having a negative effect on the country’s economy, the experts are concluding.

Manufacturing has taken a dip, with the smallest improvement in sales since 2009 and the companies are blaming the political uncertainties for the difficulties. The Markit Economics manufacturing index fell to 50.8 in April, the lowest it has been since September 2009.

American households also seem to be retrenching as consumer confidence slides to the lowest level since last September. The unusual and more confrontational nature of the debates, rampant dissatisfaction with the major parties and the uncertainty of where the country would head under pending leadership all are factors.

Some businesses are delaying spending and investment decisions until there is more clarity about what might be on the minds of the various candidates vis a vis business regulation. Policies that might make a difference in bottom lines are still pending.

Donald trump, likely Republican presidential nominee, has thrown out such possibilities as putting big tariffs on Chinese imports, while Democratic front runner Hillary Clinton has waffled on some of the positions she has championed in the past that were pro-business.

This sort of flux in political positions has caused a lull of sorts in business activity, economic experts say. Among other indicators, orders for business equipment were down by almost 3 percent in February. The Federal Reserve also has noted signs of increasing unease about the political situation as it makes surveys for the Beige Book. Eight mentions of the campaign were made in the three reports that have been published by the central bank so far this year. In 2012, the last general election year, there were two such mentions. In 2008, there were none.

The University of Michigan’s monthly confidence survey also indicates more consumer angst about the direction of the country’s politics. The economy may be stagnant as it waits the outcome of the November balloting.

Even though the government reports job growth again this spring, other factors seem inconsistent, leading to a somewhat hazy view as to what actually can be said for the national economy in the long run.

Inconsistent Factors In Determining Growth Or Decline In Economy

In March, only 126,000 new jobs were reported by the Labor Department, ending a run that saw more than 200,000 per month. The April figure rose again, to 225,500 new jobs. But the rising employment numbers have not been matched by significant increases in earnings.

Counterpoints to the job market improvements are signs that worker productivity is lagging, exports are diminishing, only modest gains have been reported in consumer spending and overall economic expansion is “sluggish.”

America has been the engine pushing the world’s economy in recent years, but the International Monetary Fund predicted recently that recovering strength in the big Asian economies could see them move into the lead.

The many factors determining either growth or decline in the economy are sending mixed signals of either potential strength or potential weakness. Lower oil prices have led to cutbacks at energy companies and the manufacturers who supply them. A stronger dollar has stymied export growth and depressed corporate profits.

On the rosy side, layoffs are down and home sales have surged this spring. A bad winter weather-wise, cheaper oil and a West Coast port wrangle (since resolved) all had a negative impact.

Factors Being Poured Into The Economic Mix In Recent Reports Include:

The number of Americans who applied for unemployment benefits dropped to 279,500 recently, the lowest level in 15 years. The decline seems to portend more hiring, according to the Labor Department. Some employers are holding off on hiring until the trend of the economy is clarified, the department report said. That opinion was supported by a private survey by ADP, a payroll processor. That survey showed that businesses added 169,000 jobs in April, compared with 175,000 in March.

Worker productivity dipped in the first quarter of this year while labor costs went up. The Labor Department report said it was only the third time in 25 years that productivity has shown a decline over two quarterly reporting periods. Such declines suggest that workers are becoming less efficient.

The trade deficit increased in March, creating a drag on the U.S. gross domestic product. However, imports rebounded after the West Coast ports dispute was settled. American exports have become more expensive for foreign purchasers because of the strength of the dollar. The trade gap rose 43 percent over February, the government report shows.

Although the government estimated an 0.2 percent annual growth during the first quarter of 2015, some economists argue that when the trade deficit is factored in, there was actual shrinkage in the economy from January through March.

Americans are feeling more relaxed about the economy, according to the Thomson Reuters/University of Michigan Consumer Sentiment Index (CSI). In January, the survey posted the highest level of confidence since 2004, before the Great Recession sent the country into a nosedive.

The CSI is an important measure that Investors, retailers and economists use to help determine what they will do next. When people are feeling good about the economy, the index rises and the economy gets a boost. Between 2005 and 2014, the monthly index averaged 77.1. The reading for December 2014 was 93.6 and the January 2015 reading was 98.1. Since July of 2014, the index has improved by 20 percent. Economists are encouraged by the fact that that the confidence level rose in households with income under $75,000, as well as in those with higher incomes.

At the root of the improved confidence levels are signs that the effects of the Great Recession are beginning to wane. Higher employment rates, small increases in wages and lower gasoline prices are among the factors.

Economic prognosticators, however, remain cautious, predicting that the gains will be slow, if steady. Most workers are expecting only modest gains in income over the next five years, so spending increases also will be moderate. Shoppers are likely to look for big price discounts before they will be convinced to buy, and that contributes to dis-inflationary pressure, the experts say.

Despite the cautious approach to predictions for this year, the signs all indicate that the country is regaining its economic equilibrium. 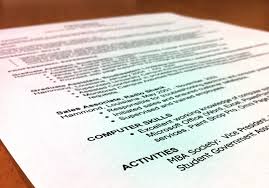 When your resume is a large part of the first impression a prospective employer sees, you want to be sure that the resume tells the true story. It’s enough to keep you awake nights before a crucial interview as you try to decide how much information is necessary and at what point it becomes fluff.

By all means showcase your professional accomplishments, but relate them to the job you are seeking. How does what you have done relate to the skills required for this new employment opportunity? The company you are trying to impress will understand that you have researched the job and that you are in tune with the skills they want.

If your resume is dated, bring it up to date. It should be flexible to meet the specific needs of the actual position you desire. Though some information, obviously, will always be the same, there may be areas of your past work experience that will relate more directly to this position. The traditional wisdom said that a one-page resume is best. But if you have experience that seems relevant and it won’t fit on one page, don’t hesitate to include a second page. Be concise, but not stingy. Don’t short change yourself for the sake of brevity.

Your entire job history may be excessive, especially experience that is totally irrelevant to the position you are seeking. Don’t neglect gaps in your experience. Many times they are entirely justified. Even if you have gaps related to the current job market, many employers are aware that the recent recession put understandable holes into the job histories of many Americans.

Honesty counts. Don’t embellish your experience and skills. Open discussion of past problems is better than back-pedaling to explain things for which you have no good explanation. You may be asked to demonstrate certain skills. Failure to perform is the death knell for your application.

Neatness counts as well. Errors or a poor layout of your resume may catch the interviewer’s eye sooner than the content. Have a qualified friend or a professional proofreader look it over before you hand it to a prospective employer.

Non-paid internships or volunteer work in a related field are legitimate items to include in a resume, especially for young applicants whose experience is naturally limited. A mix of information may impress the reviewer with your willingness to try many things that add to your versatility.