You are here: Home / Archives for Money Management / Mortgages

The Federal Reserve raised the prime interest rate recently by just a small percentage, but enough to raise expectations that Americans will face higher borrowing costs for homes and other big-ticket items., including credit card costs.

The benchmark rate now stands at 1.75 to 2 percent. It’s the first time the rate has reached that level since 2008, when the economy tanked while the feds were hoping to get rates down to zero.

The recent action indicates the Fed has confidence in the current economy and that it has enough strength to accommodate a slight increase in borrowing costs. The increase is evidence that recovery from the 2008 recession is strong.

The current increase is the second this year and the seventh since the recession.

While announcing the increase, the federal agency also indicated that two other jumps in the prime rate are likely this year.

After years of near-moribund status fueled by a prolonged recession and problems in federal assistance programs, America’s housing market trend appears to be up, at least in the Beehive state.

Alan Blood of Capital Financial Group, based in Bountiful, Utah, says that figures for the population-heavy Wasatch Front area of Utah show that there is reason to hope the market is stabilizing. Although there has been a 30% decrease in the number of homes on the market however there has been a 5 percent increase in loan applications in recent months. Good prices and quicker sales are evidence of a reviving market.

“At least in Utah, where $200,000 is the median price for a home, that’s good news for everybody,” said Blood. He talks about housing market realities every Friday from 9 to 10 a.m. on local K-TALK Radio, AM 630. (Visit K-TALK.com for details.)

A graduate in economics from BYU,  Blood became a mortgage broker. He also received a degree in Law by attending Brigham Young University’s Law School. With the law degree under his belt, he re-examined his career goals. He found the study of law useful to continue his career in mortgage brokering which he really enjoys.

Based on long experience, Blood can offer some suggestions to those who are in the throes of buying a home or considering it in the near future:

It’s probably the most common mistake first-time buyers make, he says. Especially if the buyers are a new family with potential for growth, a small home can quickly become inadequate, calling for a new purchase in only a few years, before the initial costs of home-buying are recouped. There is little equity accrued, so too much of the new purchase goes into the front-end process, he says. If possible, it is wiser to look ahead at least ten years to allow for equity growth before taking the plunge again. The average time a family stays in a new home, according to Fannie Mae figures, is 4.2 years. And, also on average, the typical family makes six moves in a lifetime.

Don’t Focus Only On The Interest Rate

It’s understandable that with a long-term loan, the tendency would be to consider the interest rate to be the most pertinent consideration the buyer needs to look at.

In reality, the advantage of a very low interest rate can quickly be cancelled by higher closing costs. Spread over 30 years, for instance, the difference between an interest rate of 3.5 percent and 3.75 percent is just $3,250 —approximately $27 per month. “It takes your about 10 years to break even,” Blood says. Looking at every element of the purchase costs is essential to get the best deal overall.

Mortgage Brokers Can Help Get The Best Deals

“No bank will always have the best deal every day. Mortgage brokers work with as many as 18 banks in any given day,” Blood notes. Interest rates and other variables involved in a home purchase change frequently, often within a day’s time. In addition, federal law requires that mortgage brokers give the best rate a buyer can qualify for, a standard that banks and credit unions are not obliged to observe.

In general, Blood advises that home buyers go into the search armed with as many facts as possible. It’s one of the most complex and demanding purchases a family is likely to make and it deserves some study and research. Begin the process educated and enlist a good broker to make recommendations. As the market continues to improve over the next few years, these are the buyers who will benefit from the rebound, he says. Contact him for more information about mortgage loans.

Hold onto your wallets, folks. The failure of the congressional “Super  Committee” to specify ways the United States can reduce spending in the next ten years means that everything having to do with taxes is likely to be scrutinized in the effort to shore  up national solvency.

Some say that the mortgage interest deduction —the biggest break available to many American taxpayers— is sacrosanct and not likely to be scrubbed.  But there is the lingering memory of the time when interest on all debts, not just a home, could be deducted when tax preparation time came around. Interest on credit card debt, car loans, student loans and other large-ticket purchases could be taken out of the final tax tally.  In the mid-1980s when they were eliminated, then-President Reagan pled for retention of the mortgage interest deduction or it may have met the same fate. Reagan defended the mortgage interest deduction as a factor in promoting home ownership, one of the prime elements, he claimed, of the “American dream.” The fact that those other interest benefits were axed is enough to make taxpayers wary as the debate heats up again.

The Joint Congressional Committee, in its widespread look at all the possibilities, noted that the mortgage interest deduction cost the country’s tax coffers some $90 billion in 2010. According to IRS figures, 51.1 percent of all homeowners in the United States claimed the deduction, while 31.6 percent did not have a mortgage and 17.3 percent  didn’t claim the deduction.  The loss of the deduction would be highly unpopular with a large portion of the population and it certainly would be a hard-fought battle.

Although American homeowners have come to expect this tax break, few comparable countries—Australia, Canada and Great Britain among them—do not provide their taxpayers this advantage. They might wonder what behavior the U.S. would be trying to encourage by removing the benefit. Rentals as a preference over home ownership?

Appearing before the U.S. Senate Committee on Finance recently, Robert Dietz, an economist and vice president of the National Association of Home Builders said removal of the home interest benefit would increase the disparity in economic income and cause further shrinkage in the middle class.

However, the deduction overwhelmingly favors the rich. The limits are quite high—up to $1 million on a mortgage’s value and an additional $100,000 for home equity loans. The amount that can be deducted does not fall as people’s incomes rise. Someone with two or three homes falling under the $1 million limit significantly benefits.  It hasn’t become an open issue yet among the people who support movements such as the Occupy Wall Street line of thought, but it could if the tension between the haves and have- nots intensifies.

Most experts agree that in the current housing market, elimination of the mortgage interest break could exacerbate conditions that already are problematic. The effects of the deduction are not the same everywhere in the country, but the many factors that will enter into any debate on the matter tend to be emotional, especially among those who  teeter on the edges of being able to afford a home.

Experts say there would be some trade-offs. A spokesperson for Moody’s Analytics noted that the tax deduction is written into the cost of a home. Its elimination would  have a negative impact initially, especially  in higher-end housing. On average, its demise would cost a taxpayer no longer able to claim the deduction about $2,400 a year in additional taxes.

No one knows where the current rancorous stalemate in Washington will lead. But it seems inevitable that the debate over finances portends study of every element of the current tax system. And the conversation in today’s financial atmosphere is likely to focus more on federal revenues than on what the mortgage interest deduction is supposed to accomplish in behalf of home ownership.

Save up to 50% off when ordering personal checks at Coolchecks.net.

If you have a personal finance blog or your site is about helping people improve their financial situation, then you might enjoy using this finance widget on your web site. Buying a new home and getting a mortgage can be a daunting process. Some people are scared that they won’t be able to afford the monthly payments. This calculator will show you what your payments would be on a loan based on the interest rate and the length of time of the loan.

Instructions for installing this widget are easy. Just click the get free calculator and then copy and paste the text onto your web site. If you run a WordPress site, just simply add the code to a widget text block.

Please leave any comments or suggestions for improvements and we will try to implement them. Enjoy this free mortgage calculator for your blog or web site. 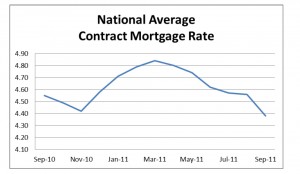