You are here: Home / Archives for jobs

You hear all kinds of things: Either the job market is looking rosy after the devastation of the recession, or things are still rocky. What should you believe?

Although there are indications of steady hiring and falling unemployment, experts are still baffled by some of the relevant data. At the core of the debate is whether the current 6.1 percent unemployment figure, while it is far below the 10 percent rate registered at the beginning of the recession, really give a true picture, or does it overstate the improvement?

The question of whether the feds will raise interest rates depends on how things sort themselves out. “We’ve never seen a labor market quite like this,” said Peter Cappelli, an economist with the Wharton School of Business.

Despite the improvement of the unemployment part of the puzzle, there are many companies that aren’t filling their job openings and many individuals who were jobless during the height of the recession apparently are waiting for further signs of stability before they start job searches.

The National political campaigns, soon to end in the Nov. 4 balloting, have kept the focus on the labor situation. Polling among voters indicates that behind the overall economy and terrorism, the unemployment statistics are much on the minds of Americans.

Five “mysteries” points related to the labor quandary include:

1. How many people are in the pool of those who didn’t look for jobs when the economy slumped or stopped looking when the recession went on? Will they re-enter the job search when it is clear that the economy is improving? Since the recession began in 2007, the number of adults either working or seeking work has dipped from 66 percent to 62.8 percent. That’s a 35-year low, equal to about 7.5 million people. Retirements among the Baby Boom generation have contributed to those data, probably accounting for at least half of the exodus from the workforce. Young adults are staying in school longer. Some who aren’t job-hunting are receiving disability aid. The economists look at the figures and conclude that many of the dropouts are not likely to come back into the ranks of job-seekers. For the employer, that could mean a demand for higher pay for the jobs that are available.

2.Where are the 3.8 million who were unemployed for more than six months, but no longer are counted in the unemployment data? Have they got jobs or have they quit looking, changing their status in the figures? Labor Department data indicate that about 12 percent of the long-term unemployed are finding jobs each month. Federal economists who sifted data over a whole year, however, found that nearly 40 percent of the long-term unemployed found jobs during that period.

3. Why is it that 7.3 million people looking for full-time jobs can find only part-time work? The figure for this category before the recession was only 4.6 million. Economists think it indicates that there are more wanting work then the unemployment rate suggests. He thinks this situation justifies another percentage point on the unemployment rate. The situation may affect wages, portending they won’t go up any time soon. In general, wages start rising when unemployment hits its current level. A rapid rise in wages could trigger faster inflation.

4. Companies are advertising more jobs, but not filling all of them. That makes an imbalance between the jobs available and the workers seeking them out. It seems companies are not as aggressively filling jobs as they did pre-recession, taking an average of 25 days to fill a job, compared with fewer than 22 before the economy tanked. Some economists suggest the changes related more to new technologies that allow employers to post jobs. They may post the jobs before they actually are ready to hire, just because they can do so easily.

5. Why has job growth declined for women? The growth rate for females dropped more than 14 percent this year. Although more jobs are being added – an average of 215,000 per month this year – women have taken fewer than 40 percent of those jobs. Women’s participation in the labor force was nearly 63 percent after the 1981-82 recession; 51 percent following a 1990-91 downturn in the economy and 47 percent after a similar dip in 2001. Government studies indicate that men are taking jobs in sectors traditionally dominated by women, including hotel, restaurant and financial services. Women are having less success in the manufacturing sector as well. The recession hit traditionally men’s jobs harder, accounting for 71 percent of the losses.

Experts expect that the job market will continue to return to more normal trends over time. 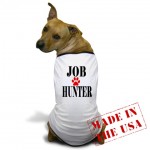 When people lose their jobs, it’s a devastating experience no matter how tactfully they were told they were no longer needed. The life they once knew as financially and emotional secure has been ripped away.  According to many sources this loss is similar in intensity to a divorce or death.

Here are 10 quick tips for surviving a job loss. (Click on the dog to buy the cute doggie tee.)

1. Be grateful for at least one thing in your life on a daily basis. It’s so easy to get angry about situations beyond your control.  Gratitude helps immensely.

4. Talk to everyone you know and let them know you are looking for work. If there was ever a time in your life that you felt more like crawling in a hole and covering yourself up with sand, this is it.  Let go of this feeling as quickly as possible. The more people that are aware you are job hunting, the higher your chances of getting interviews that lead to employment.

5. Become a sales person about the most important thing you will ever sell anybody – YOU! It is extremely difficult for some people to think of themselves as a product, but in a way that is what we are. If you could describe yourself as a product a buyer needs what would you say?

6. Control the job hunting process. Being laid off is a situation that is out of your control. In fact the only thing you have control of is the actual job hunting process. Plan out daily time periods where you will be on the phone inquiring about job openings and actually talking to possible employers.  Avoid doing anything else during this time.

7. Don’t overrate the value of a resume. What is going to get you hired with a new company is your interaction with the interviewer. Write a good resume, but don’t get stuck on spending hours doing it. Many employers are extremely busy and just want the answers to where your worked, how long you were working and what you did.

8. Avoid writing an objective on your resume. Employers care about what they want, not what you want. They want to know if you will fit the position they have in mind for you. As Tony Beshara states in his book, “The Job Search Solution,”

The clear message of an effective resume needs to be  “You need to interview ME because this is what I have done in the past FOR OTHERS and therefore THIS IS WHAT I CAN DO FOR YOU!

9.  Jobs are given to the people who sell themselves best. Don’t be afraid that the qualifications you have aren’t the absolute perfect fit for the jobs you apply for. Maybe someone else looks better than you on paper, but people get hired who are best at selling themselves. 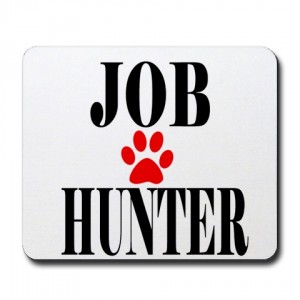 10. Research, research, and more research. Find out about the company you are asking to work for.  Find out everything you can about them. Ask yourself if you would be happy working for that company. Talk to people who are already working there.

Loosing a job is difficult. Hang in there and keep your spirits up. Often, when one door closes, another door is opened.