You are here: Home / Archives for affiliate marketing

Affiliate marketing? People look at you quizzically when you tell them that is what you do to make money. Most people have no idea of what affiliate marketing is. They just can’t wrap their minds around the idea even when you explain it to them.

Most will ask how they would start affiliate marketing and how they would choose a product to promote?  This is a common question that has an easy answer. Research your desired niche products and see what kind of demand is there. Use the Google keyword tool to choose a niche that has a lot of monthly searches – over 40,000 searches a month is good enough to get started. Make sure you have enough interest in providing your customers with as much helpful information as you can. If you have no interest, you can still promote the products, it just won’t be as fun.

Next, you will need to apply to become an affiliate through an affiliate marketing company. There are several major affiliate companies that are very highly recommended. One is Clickbank, which offers thousands of information products that people can download after purchase. Some of these products are software products that have a recurring charge and hence brings you a monthly payment without getting a new customer. Other products are solutions to various health problems. Some will teach you to learn a new skill. Some will actually tell you what the best selling products are. 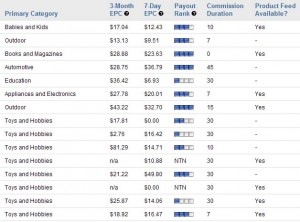 A second company to check out is Google Affiliate Network. Google has combined their affiliate network payment schedule with their Adsense payments. So if you are already getting money from Adsense this is a good fit for you.

Google has thousands of merchants. When you log in to their site, they’ll give you statistics that are important to understand. There is a figure called EPC – and this means earnings per click. There is a 3 month EPC and a 7 day EPC. You’ll see that the higher the numbers, the better chances you have of selling their products. They list these statistics for each merchant. They also show you the merchant’s payout rank. So you’ll be able to see which merchants are paying the most to affiliates. Choose your merchants wisely with help from these statistics.

A third company to check out is
Sshareasale.com. They have hundreds of merchants with thousands of products. They will deposit your earnings directly to your checking account on the same day every month. Shareasale is run by Brian Littleton, who is experienced in every aspect of ecommerce. Shareasale has many merchants to choose from and they provide easy ways to make an web page that will display products on your site. They also have some video selling options available.

Affiliate marketing is challenging, but worth all the effort you put into it. You can be your own boss and set your own working hours. Be warned though, you’ll probably work twice as hard as you ever have worked. That’s what happens when you get to follow your passions. It hardly seems like work.

Affiliate Summit West 2010 was packed with people. Over 4,000 affiliate marketers, merchants, vendors and Internet entrepreneurs networked, absorbed information, played hard and partied till the wee hours of the morning. Jeremy Shoemaker, an Internet entrepreneur wizard, said that this event was the best one he has ever attended. Of course if you see his videos of black jack fun, target shooting practice, and Las Vegas magic, you will see why.

There were many super affiliates in attendance and monthly income stats could not have been better. There were people there reporting incomes varying between $200 a month up to $100,000 a month and probably more. Just an incredible range of statistics. It was hard to believe that the economy could produce this kind of success. Being a New Media Entrepreneur is paying off in a big way.

Discover the Power of Influence

Dr. Cialdini, regarded as the most cited social psychologist in the world, powerfully delivered an insightful talk about marketing. His book, Influence, about persuasion and marketing has sold more than 2 million copies. It has been consistently listed in Amazon.com as a best seller and is recommended by Warren Buffet, one of the most successful investors in history.

Dr. Cialdini is an expert in understanding the reasons that people comply with requests in business. His Six Principles of Persuasion Reciprocation, Scarcity, Authority, Consistency, Liking, and Consensus describe how you can produce lasting change in others.

He suggested that as new media entrepreneurs when we encounter people, we need to ask ourselves how we can be of service to them. People are most likely to give back when they are given something of value. What have you given to your audience lately?

Brian Clarke, owner of copyblogger.com teaches people “The Art and Science of Compelling Copy.” The blog, which he started in February of 2006, has 97,398 subscribers and hundreds of thousands of regular readers.

CopyBlogger has earned a Google page rank of 5, which means that the Blog is seen by others as having good authority. Brian has managed to inspire many people to share their expertise with the world by writing good copy for their readers and teaching them exactly how to do it.

Brian taught us that leading your business presentation with admission of fault first, followed by the benefits of your product or service is very powerful in moving people towards acceptance of your product or ideas. Apparently Aristotle developed this art of persuasion more than 2,000 years ago. Aren’t we glad we are catching on now?

Ask any one of these people what kind of future they look forward to and I think you’ll receive a unanimous vote for prosperous! Affiliate Summit West 2010 was definitely a huge success and one that will not soon be forgotten. 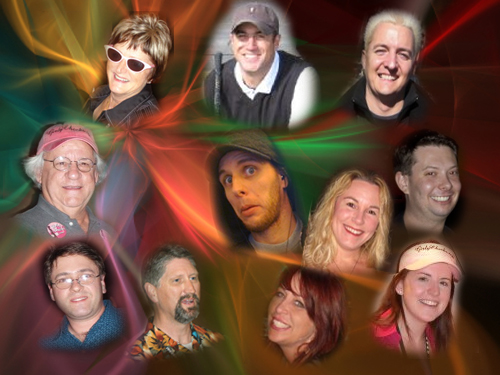 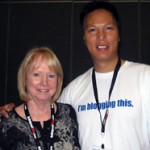 John Chow has challenged me to give him reasons why I should be chosen to receive a pass to attend Blog World Expo 2009. He probably doesn’t remember meeting me at the last Blog World Expo in 2008, so I have included my extremely unflattering photograph with him. Learn about this challenge at JohnChow.com

Last year at the Blog World Expo 2008, I was totally inspired by all the talks given by the Fab Five – four of whom are shown in the photograph below (Zac Johnson, Jim Kukral, Darren Rouse and John Chow). Notice that ShoeMoney is not in the photograph shown. He must have been off networking.

Anyway, I learned so many things at the conference that helped me with my business plans and I will always be grateful for that.  I don’t really like to reveal numbers about my income levels, but since last year in September, my affiliate income has increased by 660%. My blog traffic is now getting 14,444 unique hits a month and I can live on my affiliate earnings. I owe a lot of this success to the great information that I received from the Fab Five at the Blog World Expo 08. 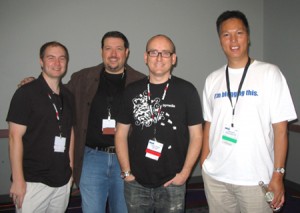 I was also recently invited to attend the Shareasale ThinkTank that is going to be held in Newport Beach, California.  Without the training that I received at the conference, I never would have been successful enough to be invited to attend. So I thank you Fab Five again. Should you consider me to receive a pass to the conference I would be so grateful. I look forward to learning much more about being successful on the Internet.

This article is a continuation of a 30 day plan to launch a new website offering bank checks. The goal of the plan was to do something every day to promote the site and see what kind of traffic we’d get. Unfortunately on August 8, the site went into the Google sandbox and none of the pages that were being listed with top positions in Google were being listed anymore. The site is still in the sandbox unfortunately. It’s not hard to tell when your site is in the sandbox because your pages won’t pull up for the search terms they were originally pulling up for.

As you can see from the graph  the site is going through ups and downs in traffic. Most visible is the drastic decrease in traffic on August 8. There is a steady increase, but this is not due to getting out of the sandbox, it is due to some promotion efforts through a company I hired to help.

Originally, I planned not to spend any money during this first thirty day period, but I caved in after the drop in traffic. I hired a company that helped me with this website and asked them to do the same thing for my new site. If you are interested in knowing who they are and what they do, be sure to email me.

The goal is to get between 500 and 700 visitors per day. At that point, the site will be pulling in some decent income.

Sites can be in the sandbox for three to six months so the plan now is to build high authority back links which means getting the site listed in different directories.

The plan now is to:
1. Add quality content to the site through a blog.

2. Work on increasing the number of inbound links (quality links not just any old link).

3. Tweak and improve the SEO quality of your site.

4. Write articles.
So you should be seeing some changes coming soon to the site which will include a WordPress Blog.

Again, the biggest mistake made with this site was to wait until the entire site was done before submitting the site to Google. So if you are working on a new site, be sure and get at least a few pages presentable with a sitemap and submit it. Hopefully that will shorten your stay in the sandbox.

If you are like me, an affiliate marketer, you may not know much about the companies that you are doing affiliate marekting for. I have been an affiliate mareketer for 4checks.com for the past several years and never realized that they actually market for a company called Custom Direct.

Half of the checks that are on www.coolchecks.net are printed by Custom Direct. This company has an outstanding reputation and owns at least 10 different check printing companies.

The CEO of the company, Dale A. Dabbs, has been in the check printing business a long time and he say:

Since 1993, we’ve committed ourselves to making positive strides to continually enhance our people, products and processes to provide satisfaction and value. We put our customers first, and we seek to exceed their expectations. Thatrsquo;s the Custom Direct Difference.

Custom Direct is committed to providing our customers with high-quality, dynamic products, outstanding service, and great support from our talented team. Irsquo;m extremely proud of the people who work for CD and their dedication to helping our Company remain a leader in the industry.quot; – Dale A. Dabbs, CEO

I was happy to hear that they have a good track record and have satisfied customers all over the country.

I think that success as an affiliate marketer comes as a result of associating yourselves with a high quality, reputable company. Custom Direct fits the bill for 4checks.com and therefore…for me at www.coolchecks.net.